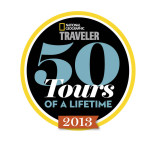 A Lazy Day at Sandy Cay, photo by Chris Smith

This is our classic multi-day trip, which we have been running since 1992.  Come see why National Geographic Traveler chose this as one of “50 Trips of a Lifetime” for 2013.

Day 1: We meet in Cruz Bay on St. John at 8:00 a.m. After a brief introductory meeting, we will issue everyone dry bags for the trip, then grab a quick bite to eat at a nearby bakery. Next, we load everyone onto a power boat and transport the group and the kayaks upwind. After clearing customs in Tortola, we will proceed to Peter Island. There, we go over the fundamentals of paddling a kayak in calm water. After a break for lunch and snorkeling we will go for a short paddle. 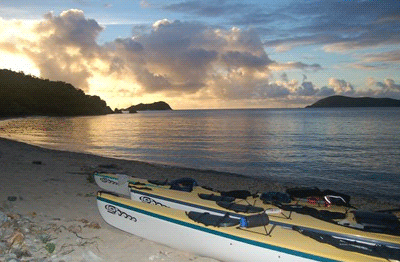 Day 2: After a leisurely breakfast, we set out from camp to Pelican Island and the Indians. Here we experience some of the most spectacular snorkeling in the Virgin Islands. From Pelican Island we paddle to Norman Island, the island upon which Robert Louis Stevenson allegedly based his novel “Treasure Island.” Anchored in the bay at Norman Island there is a ship, the William Thornton, which has been turned into a floating bar and restaurant. We’ll stop here for lunch and a cold drink before returning to our campsite on Peter Island.

Day 3: We break down camp at sunrise and have a quick breakfast before crossing the Sir Francis Drake Channel to the West End of Tortola. At the West End, we break for a couple of hours for rest, sightseeing and lunch, then head on to Jost Van Dyke, where we stay at an established campground in White Bay. 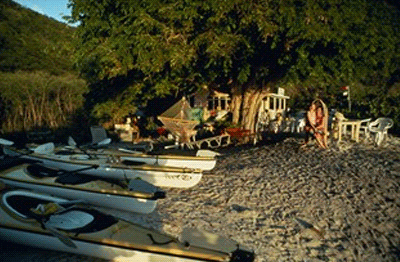 Ivan’s Campground on Jost Van Dyke is a great place to unwind!

Day 4: After another leisurely breakfast, we will kayak East to Sandy Cay and Sandy Spit. These are the idyllic uninhabited sandy islands one thinks of when one pictures a “virgin island.” We will spend the day here snorkeling and playing in the surf before returning to camp on Jost Van Dyke. 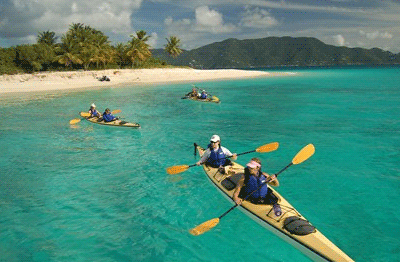 Day 5: From Jost Van Dyke, we will cross from British Waters to U.S. Waters. Before finishing at Cruz Bay, St. John, we’ll stop for lunch at Lovango Cay, Henley Cay, or one of St. John’s beautiful north shore beaches. Once back in Cruz Bay, (usually between 2-4pm), we clear customs, unpack the kayaks and head to our respective accommodations.

Remember, this is only a sample itinerary; your actual route can and will change due to wind, weather and sea conditions. If, for example, the seas are too rough for paddling (i.e. there is a small craft warning) we may spend the day hiking or sightseeing rather than paddling.